You are here: Home / News / Documentarian Celebrates the ADA: Remembering the Past, Engaging the Future 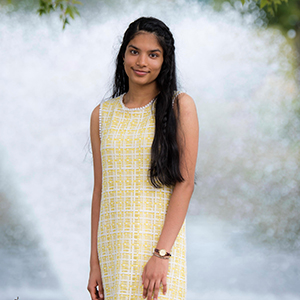 Sruthi Subramanian is a high school student from Arden Hills, Minnesota who created a film documentary about the 30th anniversary of the Americans with Disabilities Act (ADA). She submitted her documentary to the National History Day Competition and was a state finalist in Minnesota. The Minnesota Council on Disability asked Sruthi to share her experience in a guest blog about creating the documentary and her thoughts on how younger generations can get more involved in Disability Rights Advocacy.

Sruthi’s documentary can be viewed on YouTube: Celebrating 30 Years of the ADA.

Over the past four years, I have participated in a school competition called National History Day, where I’ve been able to create and present documentaries on a wide range of topics, including Norman Borlaug, the Kindertransport, and the Thalidomide tragedy. In Minnesota over 25,000 students create documentaries, exhibits, websites, papers, or performances for History Day competitions at the regional and state level. These projects have to fit the theme for the year. This year’s theme was “Breaking Barriers in History.”

I first learned of the Americans with Disabilities Act (ADA) in my high school civics course this past fall, but we were simply taught about the impact the ADA had on American society. I was curious as to why it took so long for the rights of people with disabilities to be recognized by American society and the events that led up to the signing of the Act. As I began researching the topic, I knew I wanted to showcase the struggles and barriers prior to the ADA, but also the persistence and activism of individuals like Judith Heumann who advocated for the removal of these barriers. After doing some initial research, I knew that I wanted my documentary for the National History Day competition to focus on the passage of the ADA and how it was able to break down numerous barriers for the disability community.

As part of the competition, I was required to include an interview from a community member or some expert. For my documentary, I was able to connect with and interview Thomas Cloyd, an advocate for people in wheelchairs who started a non-profit organization that is focused on increasing awareness of paralysis, and Dr. Linda Krach, a Rehabilitation Medicine Physician at Gillette Children’s Specialty Healthcare, who sees patients with various disabilities. From each of these interviews, I gained new insight from these individuals’ stories and lived experiences. One of the most significant takeaways that I’ve learned from making this documentary is that the ADA wasn’t just a single act. I learned that it was the culmination of several pieces of legislation, demonstrations like the Capitol Crawl, and the advocacy of individuals living with disabilities that led to change. I’ve also learned about the importance of addressing the limitations of the act to ensure a truly accessible and inclusive society for all. From first learning about the ADA in my high school civics class to presenting my documentary to the United States Access Board, I’ve learned the magnitude of impact the ADA has had on those living with disabilities.

Though I don’t identify as a person with a disability, there are numerous ways to support people who do. By recognizing people living with disabilities as humans first, by showing compassion, and demonstrating empathy for their needs, we can create a more inclusive society for all.

In today’s world, the impact of the ADA is tremendous and widespread. It has allowed people living with disabilities increased access to public transportation, buildings, employment opportunities, and many other aspects of our society. While disability rights have significantly increased in the past thirty years, there still remains room for improvement. Younger generations need to build upon the work of early disability rights advocates to ensure that accessibility adaptations keep up with our ever-changing world. Individuals in Generation Z (people born between the late 1990s to the early 2010s) and Generation Alpha (people born after the early 2010s) can be better allies to their peers with disabilities by being willing to listen, learn, and advocate for their needs. The ADA was a significant turning point for disability rights, but more can be done. It is up to younger generations to expand upon the work of previous Disability Rights advocates to uplift and better ally with those living with disabilities.