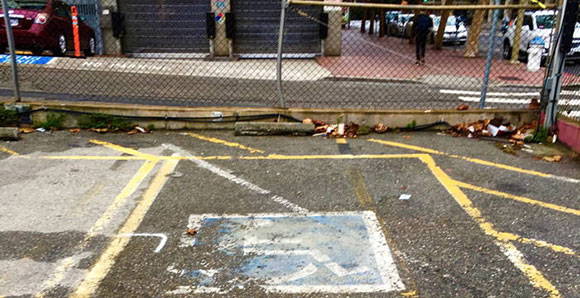 Tell the House of Representatives to OPPOSE H.R. 620

H.R. 620 (The ADA Education and Reform Act of 2017) and similar ADA notification bills are gaining more steam in Congress than ever before. If any passes, it will take the heart out of the ADA by denying people with disabilities the power to enforce its requirements.

H.R. 620 has passed the House Judiciary Committee and could proceed to the House floor at any time. The entire House needs to hear from us, starting immediately and for the next few weeks!

We must counter the business lobby, which wants to make it much more difficult to attain accessibility when businesses such as stores, restaurants, hotels, etc. disregard their ADA obligations. We can stop this bill, with your help!

Tell your Congressional Representative to OPPOSE H.R. 620, and any other bill that weakens the ADA! More about this bill:

The Americans with Disabilities Act (ADA) is a comprehensive civil rights law passed by Congress in 1990 with the goal of ending discrimination on the basis of disability. Title III of the ADA covers public accommodations, including places that open their doors or offer a service to the public and most private businesses regardless of the size of the business.

Concern has developed in recent years over the increased number of lawsuits under ADA brought by individuals with disabilities against business owners. Some of those lawsuits awarded large monetary damages against noncompliant businesses. There is no question that the number of lawsuits against public accommodations covered by Title III of the ADA has increased. For example, in 2016, 6,601 ADA Title III lawsuits were filed, which was an increase of 37% from the previous year. Some of this increase may be due to the increased awareness by individuals with disabilities of their rights under the ADA and frustration with business owners who have had over 25 years to comply with the federal standards but have not done so.

It is important to note that a third of these 6,601 lawsuits were brought by only 3 people and 40% were in two locations (LA and Miami). In other words, it is a localized issue, not a federal problem. To the extent that there are “serial litigants” or unscrupulous attorneys, state bar associations and/or courts have the power to intervene. It is also important to remember that some of these complaints may be concerning legitimate ADA violations.

As to the concern expressed relating to large monetary awards against businesses, the ADA does not allow for monetary damages to be awarded under Title III. Damages are available in a few states through state disability rights laws and some courts have awarded such awards. However, this issue cannot be addressed under federal law, and the proposed ADA Education and Reform Act of 2017 does not and cannot address this concern.

The Americans with Disabilities (ADA) Education and Reform Act of 2015

The ADA Education and Reform Act (H.R. 3765) was originally introduced to Congress on October 20, 2015 by Representative Ted Poe of Texas in response to business concerns. The stated purpose of the bill was to promote compliance through education, to clarify the requirements for demand letters, and to require notice to the business and time for the business to address the concern before a private civil action is allowed. The efforts to move the bill to a vote eventually stalled.

The Americans with Disabilities (ADA) Education and Reform Act of 2017

The major components of the bill are as follows:

Passage would undoubtedly reduce the ability of individuals with disabilities to eliminate barriers in a timely way.
Passage would not end the issue of “predatory” lawsuits, because the bill does not control those lawyers who may continue to file multiple law suits on behalf of a few clients, after the waiting time has lapsed. Nor does it control those lawyers who may use “threats” of lawsuits to force businesses into settling with an individual rather than face any potential legal action.

The ADA Education and Reform Act does not address the damages award issue either. Because the ADA does not allow for damages, individual states would need to amend existing state laws which do allow such awards.