You are here: Home / News / Mental Health and Wellness Awareness Day at the Fair 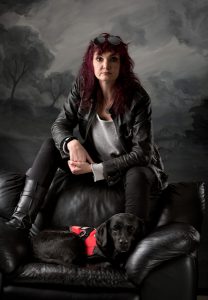 Monday, August 26, 2019 is Mental Health & Wellness Awareness Day at the Minnesota State Fair. Long-time MCD partner, activist and mental health champion, Kate Eifrig impresses all who meet her. Her tenacity, her integrity and her ability to communicate how she lives–and at times it ain’t pretty–with chronic and exhausting depression and PTSD to raise awareness makes her the perfect partner today as we join the MN State Fair’s activities to bring awareness to mental health and wellness.

In thinking about writing something for Mental Health and Wellness Awareness, the first thing I thought was, ‘mental illnesses can be really exhausting.

Sounds like a no-brainer, right? My name is Kate Eifrig and I have refractory treatment resistant major clinical depression and complex PTSD. Here’s the first thing I’d like to note because of the source where you’ll likely be reading this: not all mental illnesses are considered “disabilities.” Nor should they be. Many people who get diagnosed with a mental illness can be treated with relatively simple management. Note, I didn’t say they can be “cured.” Mental illnesses are not curable, but they are manageable–just like many diseases from epilepsy to diabetes.

Back to the “exhaustion” part–Even people for whom mental illness is not considered severe or a disability, the management of the disease can be tiring, frustrating, time-consuming and ostracizing. When I hear people say–in reaction to a person whom they find out has a mental illness–“I hope they get the help they need,” more often than not, the speaker, though well-intended, has no clue that “help” doesn’t come with one treatment. Or one doctor. Or even one therapist.

Imagine that you have been diagnosed years ago with a heart condition. One day you have all the symptoms of a heart attack so you immediately go to the ER. Now imagine that you are told one of or a combination of the following:

I started one of the worst episodes of my illness last year and when I went to the emergency room on two different occasions, ALL THREE of these were said to me.

The most damning thing about mental illnesses is that they are invisible. There are no blood tests to see how severe your illness is. That’s because your illness can be the exact same as another person with the same diagnosis and they manifest completely differently. The invisibility makes a person question or doubt the validity of the disease’s existence at all. This keeps millions and millions of people from getting help.

Another thing that keeps people from getting help? Stigma. You hear that term tossed around but it’s perhaps more clearly stated as “discrimination.” People with diabetes or epilepsy or heart disease are not considered weak of character, unpredictable, scary, incapable of relationships or fulfillment. People with mental illness, however, suffer from those prejudices every single day. Often they’re so deeply ingrained that even the most open advocates for mental health rights–like myself –face it every hour.

What can YOU do as an individual to fight the stigma? Two easy changes. First, change your language and encourage others to do the same. Stop calling people “bipolar” if they are in a good mood one day and in a bad mood the next. If a person thinks that having an organized desk is “OCD” it invalidates the severity of the illness. If someone jokes about “if this day gets any worse, I’m going to kill myself.” What can you say to a person who is using this stigmatizing language? “Hey. Can I ask you to please find another way of saying that?” That’s it. If a person wants to continue the conversation as to why you are asking, that’s your choice. The other change: if someone you know says they’re feeling depressed or if you know they’re dealing with a mental illness, remember this phrase, “Validate, don’t fix.” To legitimize mental illnesses as real diseases of the brain, which they are, we need to remember that only medical professionals can diagnose and effectively treat their patients. Though the temptation is to offer advice because it is uncomfortable to feel unable to fix the hurt, unless you are a doctor, you can’t fix it any more than you can offer to build someone else’s prosthetic leg. If you hear someone saying, “I’m miserable and feel hopeless and scared,” start with, “I’m so so sorry. That sounds awful. Would you like to talk to me about it?”

(P.S. If you’re ever in need of any guidance or a place to start if you have questions? Almost every state has a chapter of the National Alliance of Mental Illness. They support, advocate, educate, and speak out for so many who feel invisible.)