You are here: Home / Blog / Thanks to the ADA… The Olmstead Decision – ADA 30 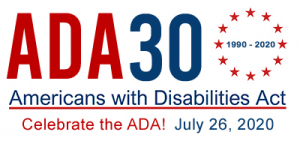 In 1999, the Supreme Court declared that the State of Georgia violated Title II of the ADA by forcing people with disabilities into institutionalized care. Olmstead v. L.C. and E.W. reached the Supreme Court when the Georgia Department of Human Resources appealed a decision by the 11th Circuit that it had violated the ADA’s Title II ‘integration mandate’ by segregating two women with mental disabilities in a state psychiatric hospital – repeatedly and long after the agency’s treatment professionals had recommended their transfer to community care.

The Supreme Court confirmed loud and clear that forcing individuals with disabilities to live in institutions is precisely the kind of segregation that Congress sought to eliminate in passing the Americans with Disabilities Act (ADA) in 1990. This case has famously come to be known as the Olmstead Decision.

The integration mandate was the yardstick for the Court’s ruling that people with disabilities must be afforded the opportunity to live and interact with those who do not have disabilities, and that public agencies are obligated to “…provide services, programs, and activities in the most integrated setting appropriate to the needs of qualified individuals with disabilities.”

As Justice Ruth Bader Ginsberg said when delivering the opinion of the Court, “…states are required to place persons with mental disabilities in community settings rather than in institutions when the State’s treatment professionals have determined that community placement is appropriate, the transfer from institutional care to a less restrictive setting is not opposed by the affected individual, and the placement can be reasonably accommodated, taking into account the resources available to the State and the needs of others with mental disabilities.” (Supreme Court Upholds ADA ‘Integration Mandate’ in Olmstead Decision)

This historic decision became the encouragement to free tens of thousands of people with disabilities from unnecessary and unjust custody, including those threatened with compulsory placement while living outside an institution.

In 2003, the 10th Circuit Court held that the protections in Olmstead “…would be meaningless if men and women with disabilities were required to segregate themselves by entering an institution before they could challenge an allegedly discriminatory law or policy that threatens to force them into segregated isolation.” In that case, these individuals – who were residents of their community – stated unequivocally that they would rather die than be forced to enter nursing facilities. The Court held that these men and women were also protected by Olmstead.

Home and community based services – which incidentally, are less expensive than institutional care – are essential to maintain individuals with disabilities and chronic health issues at home and in their communities. The Supreme Court has declared this a civil right. (The Olmstead Supreme Court Decision in a Nutshell)

As Olmstead expands, it becomes possible to foresee a time when all Americans will have the supports they need regardless of the extent of any disability or impairment to live in the community and not in institutions and nursing facilities.

Thanks to the ADA, people with disabilities can live in the communities and homes they choose, with access to the care they need.