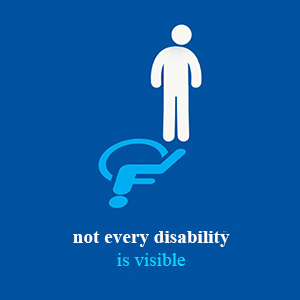 I have a disability that can be considered a hidden disability. I have a congenital genetic condition called Usher Syndrome which manifested itself as a severe hearing loss at birth and then progressive vision loss starting when I was a teenager. I was 19 years old when I was formerly diagnosed with Usher Syndrome which revealed to me that my hearing loss and vision loss were connected.

I was only 10 months old when my parents began suspecting that I may have a hearing loss. This was in the late 1980s so prenatal screening for hearing loss was not a standard for infants at birth and after many visits with ENTs and audiologists, I received my first pair of hearing aids when I was 2 years old. From that point on I had regular speech therapy until I was about 12 years old. I never learned American Sign Language primarily because my father was serving in the Air Force at the time which required us to move to completely new places around the world every few years. This prevented us from getting involved and acquainted with the Deaf community (again, this was in the pre-internet era so long-distance communication was very difficult. Zoom, Facetime, and Skype existed only in our imaginations (and in the movies, “Back to the Future II”). I relied on speech therapy, context clues, and lip reading to fill in the auditory gaps that my hearing aids at the time missed. Eventually hearing aid technology would improve and with the introduction of digital hearing aids, I was able to hear almost as well my friends and family without hearing loss.

I was about 15 years old when I started to notice that I wasn’t seeing as well in low-light situations as my friends and family. I remember asking my optometrist at the time about it and he said matter-of-factly, “You probably have some night-blindness which is common and usually harmless”. He never suggested or offered further testing and reassured me that I would be “fine”. From that point on it really was only a mild inconvenience and my friends and I would joke about it. I used a lot of self-deprecating humor when I would run into furniture, trip over curbs, or get disoriented at night.

The night-blindness got progressively worse to the point that when I was 19, I decided to see a retina specialist about it. I remember when I walked into the doctor’s office, she immediately started asking about my hearing aids and how long I had a hearing loss. Confused, I said “I didn’t come here for my ears. I know I have a hearing loss. I came here for my vision!” She replied, “Yes, I know. But I think your hearing loss and night-blindness are related. These are the symptoms of Usher Syndrome.”

This was the first time I had ever heard of this condition. The doctor gave me a brief explanation, but it wasn’t until I got home and began googling more about it that it hit me that I was going blind. After having a hearing disability my entire life, it seemed quite unfair to also be given a vision disability. At the time there wasn’t any treatment or anything one could do about it. My doctors simply told me to prepare to go blind. My night vision continued to get progressively worse and then eventually I began noticing that my vision was worsening in the daytime as well. My peripheral vision began to narrow, and I began to see constant flashes of light in the corners of my vision. It also began harder to follow fast moving objects and I became extra sensitive to bright lights and computer screens.

Despite having a hearing and vision loss, I do not identify as Deaf, Blind, or even DeafBlind. These terms have specific cultural and technical definition that I believe do not accurately describe my experience. I do identify as a person with a disability, but my experience is best described as a hidden disability. I still can hear, and I still can see, it just differs from those without hearing or vision loss.

This presents unique challenges in today’s world because unless you know me well, you would not know that I have a disability. When I was younger, I took this as a source of pride. It made me happy that I was “passing” and I loved to hear people say “I never noticed you had a disability!”. Now that I am older and wiser, I have realized that this is a form of internalized ableism and was doing me more harm than good.

A personal example of this for me is at the movie theater. If I want to get up in the middle of movie to get refill on popcorn, I have to count the number of seats and rows I am away from the door and remember this so that I can find my way back. In the dark movie theater, I can’t see faces or even people in their seats. One time, I had miscounted and went down the wrong row. When I counted to where I thought my seat was, I sat down…only to realize too late that the seat was occupied by someone. Needless to say, she was startled and began screaming. The security stopped the movie and turned the lights on. I frantically tried to explain that I had a vision disability, but without the universal symbol of a white cane, they did not believe me. Fortunately, my friends were there and were able to vouch for me to calm things down. However, I was so embarrassed and traumatized, I left and did not watch the rest of the movie.

More times than I can count I have been kicked out of bars because I tripped over a chair or ran into a person in the dimly lit environment, leading the bouncer to think I was intoxicated. One time at an airport, I was rushing to make a connection when I ran hard into a man and knocked both of us to the ground. He got so angry and threatened to physically assault me because he did not believe that I had vision loss because “I wasn’t carrying a blind stick”. I have been accused of being rude because I did not hear a person and people refuse to repeat themselves because they think I am not listening to them. I once had a substitute teacher accuse me of cheating on a test with headphones and didn’t believe me when I told him they were hearing aids because my voice “didn’t sound deaf”. I have even had people back out on dates with me because I couldn’t drive a car and needed to use public transit.

Fortunately for me, none of these situations led to dangerous confrontations and mostly just bruised my ego. However, for some, hidden disabilities can be deadly. Countless cases of violence against those with hidden disabilities, including by the police, happen every year because of misunderstanding of deafness, autism, or mental illness. Black, Indigenous, and People of Color who have hidden disabilities are at even greater risk of discrimination and violence.

I don’t use a white cane to aid in my mobility (although I may some day in the future) but I have often told my friends and family sometimes I just wanted to carry around a white can just to signal to the public that I have vision loss. A white cane a universal symbol for blindness (there’s even an emoji with a white cane) and it’s much easier to garner sympathy and understanding for vision loss with one. It’s exhausting having to constantly “come out of the closet” with my disability and some days I wish that I could just wear a giant sign that says, “I have a disability”.