You are here: Home / Disability Awareness / LGBTQ+ Pride and Disability: Coming Out 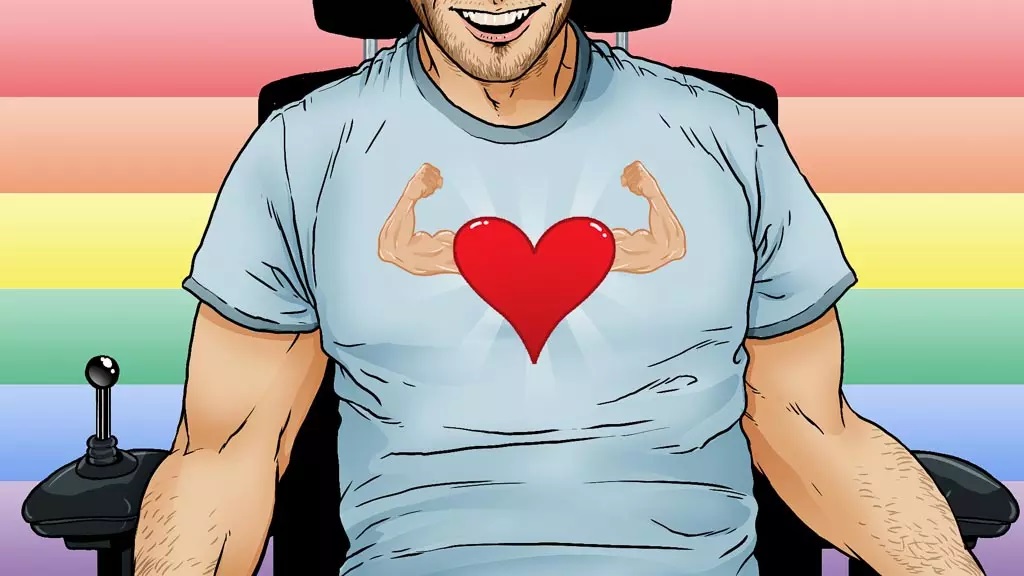 June is Pride Month for the LGBTQ+ community. These days, pride includes community-wide celebrations, festivities, concerts, and parades in cities all over the country. However, the very first pride parades on June 27th & 28th 1970 were protest marches to mark the anniversary of the Stonewall Riots in New York City. Pride, at its core, is a protest and part of the ongoing civil rights movement for LGBTQ+ people around the world.

The civil rights movement for the disability community has many parallels to the LGBTQ+ civil rights movement. Comparing the civil rights struggles between two marginalized groups can be a dangerous political tightrope. Still, as a gay man with severe hearing loss and progressive blindness, I have experienced homophobia and ableism in very similar forms. The struggle to be included in civil society is often intersectional.

This year, the LGBTQ+ community has a significant milestone to celebrate. According to a recent Gallup poll, 70% of Americans support the right to marry for LGBTQ+ people, up from 40% only a decade ago. Even more impressive is that 55% of self-identified Republicans, who traditionally strongly opposed it, now support marriage equality. One can almost get whiplash from the speed of acceptance by mainstream America of the LGBTQ+ community. How did this happen? How was the LGBTQ+ civil movement so successful?

There were many factors, but I believe that the disability community could draw inspiration from the concept of “Coming Out.” Until a couple of decades ago, most LGBTQ+ people lived double lives. They often did not disclose their sexuality to their co-workers, neighbors, and even their own families. They hid or downplayed their sexualities from the rest of the society, which meant that many non-LGBTQ+ Americans were unaware of the ubiquity of relatives, colleagues, and neighbors who were LGBTQ+.

Most Americans thought LGBTQ+ people were rare, “mentally ill,” and sinful perverts relegated to the fringes of society and certainly did not recognize their humanity. LGBTQ+ activists in the 1970s knew that their cause was a lost one if Americans continued to think this way, so they began advocating for “Coming Out” and publicly identifying as LGBTQ+. This was not an easy thing to do, and many LGBTQ+ Americans lost jobs, friends, and even family. Some were even murdered.

As the coming out movement began to pick up steam by the mid-2000s, many Americans began to realize that LGBTQ+ people were more common than previously thought. People realized they had colleagues, friends, and family who were all LGBTQ+. It inspired many closeted LGBTQ+ people to come out and radically changed the hearts and minds of Americans. It’s much harder to hate and discriminate against people who are part of your community, your family. The coming out movement was so successful that more than 12% of Millennials and Gen Z-ers now identify as LGBTQ+.

Eleven percent of Minnesotans report having a disability, which is similar to the number of LGBTQ+ Minnesotans. However, from my experience, people with disabilities do not have the same visibility in our communities. There hasn’t been a formal “coming out” movement for people with disabilities. All too often, people try to hide, downplay, or disassociate themselves from their disability.

Coming out, in this sense, is not about exposing your disability but accepting and expressing a disability identity. There’s a difference between having a disability and accepting yourself as a person with a disability. One is a circumstance you can’t control, and the other is a self-determined identity.

I had to come out of the closet twice, once as an LGBTQ+ person and once as a person with a disability. From a very young age, I knew that I was gay. I was also born with severe hearing loss, so I’ve always had a disability.

I consider the beginning of my coming out process as a gay man and a person with a disability to be at 19 years old, starting college and finding out I was losing my vision.

Coming out isn’t a singular event, and it can take years to process. It first starts with self-acceptance and acknowledging your own identity. Then you must work to dismantle internalized homophobia or ableism that has been taught and ingrained in you. I used to take pride in people saying things to me like, “Oh, I didn’t realize you were gay” or “I didn’t notice you had a disability.” I was proud of my ability to pass as a straight or non-disabled person and that it separated me from those groups. I thought I was exceptional.

But I know now that it wasn’t pride but shame that I felt. The shame of being associated with the LGBTQ+ community, shame being considered disabled. I thought that being gay or disabled was something I had to overcome and that all my life accomplishments were done despite being gay or deafblind. I had internalized years of shame and hatred pushed by the media, society, and my community.

Through the years, after meeting more LGBTQ+ people and more people with disabilities, it finally clicked in me that being gay and deafblind were crucial parts of my identity. The person I am today is because of the perspective I have living life through the lens of a gay and disabled person. They weren’t conditions that I had to suffer, but realities that helped shape who I am. They were identities that I could be proud of. I realized I did not deserve to be hated or pitied, and I am valuable as I am. My existence benefits those around me.

I was finally proud of my identities, sharing them with my family, friends, co-workers, and community. I finally came out as a gay and disabled man.

So this June, I hope that the disability community can draw inspiration from Pride Month and the LGBTQ+ community. We need more than just tolerance and recognition, but acceptance and integration. Much like how the LGBTQ+ rights movement benefitted all of society by calling out impossible gender standards and accepting all types of sexual identities, the disability rights movement benefits everyone by accepting all body types and valuing diverse ways of perceiving the world. “Coming Out” made the world realize that LGBTQ+ people were more ubiquitous than previously thought.